The 14th Annual Bravo and Golden Bravo Awards were hosted in partnership at the Kwanlin Dun Cultural Centre on Thursday, February 22, 2018.

This year’s Bravo Award was presented to the Gizeh Shriners of BC & Yukon planning committee for their efforts with their May 2017 Spring Ceremonial event that brought 180 delegates to the Yukon, with delegates as far as Pennsylvania, Montana and Idaho.

The winner of this year’s Golden Bravo award was Leaf Solutions for their logistical efforts with the Gizeh Shriners of BC & Yukon Spring Ceremonial.

Congratulations to both winners!

YCB would like to thank the following members and partners for contributing door prizes to the Bravo Awards: 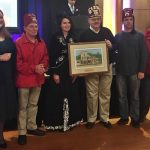 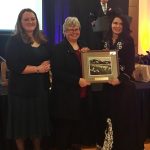