“NVD Hospitality Division & Leaf Solutions have been longtime members and partners with the Yukon Convention Bureau and we are grateful for their sponsorship and continued support.” said Alida Munro, Manager at the Bureau. “As a not-for-profit, we heavily rely on and look to our membership for support and contributions. The Yukon Convention Bureau markets Destination Yukon for conferences and events, benefiting all of our members and Yukon’s economy. Industry support and partnerships increase our presence and impact in the Meeting, Incentive, Conference and Event sector – a key ingredient to our success. ”

YCB’s Bravo Award is in recognition of Yukoners, who have worked to bring meetings and conventions to the Yukon and who encourage local organizations to host meetings here at home. This years Bravo Award was presented to the 2013 Canadian Museum’s Association Committee for their significant efforts with their May 27-31, 2013 event.

Congratulations and thank you to each of this years winners! 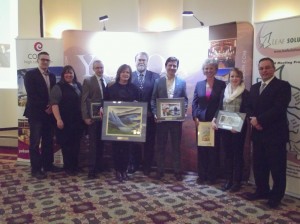